Our 1895-ish brownstone was originally designed as a 2-family house.  The rental apartment was on the top floor, with an owner’s duplex occupying the garden and parlor floors. But you knew that already.

This arrangement has always seemed weird to me, because it means that the most ornate floor of the house, the parlor with it’s fancy-ish entrance, is mostly closed-off. When we bought our house, after more than a decade of having upstairs neighbors (and all the fun that goes along with that – water leaks, office chair derby, loud children), we decided it was enough. We set up our house as an owner’s duplex over a garden rental. This means we get to use our fancy-ish entry way, but in return we also have the very small top floor rental kitchen, as the original owner’s duplex kitchens in brownstones were always on the back of the garden level.

Some day when we save enough money, we will move the kitchen to the parlor level and create the 1920s kitchen of my dreams. Until then, we make do with tight cooking quarters. How tight of cooking quarters, you may ask? Tight enough that the fridge is in a separate room.

Besides the lack of space (and proper appliances) the biggest problem with the kitchen is the floor. I wrote at length about my hatred of stick on tile, and how the top floor of the house was covered in 3+ layers of wall to wall stick on tile. I HATE STICK ON TILE! That, you definitely knew.

The kitchen and the skinny hallway that leads to it were the only spots where I didn’t pull up the tile, thinking (ha ha) that a new kitchen was in the near future. In the 4 years we’ve been in the house, the stick on tile did what stick on tile does, and it moved around. The trail of adhesive was a magnet for dirt and proved to be impervious to cleaning, leaving faux grout lines of dirt.  It was gross. It had to go.

Because the kitchen is (allegedly) just temporary, I didn’t want to spend a lot of money on the floor. This room is still into play (I want it to be my office, the husband wants to turn it into a bathroom), so there is no sense in going all fancy with a floor that will likely get ripped up. I started looking for options and actually looked at stick on tile (gasp!) but thankfully was able to stop myself before having to sink so low. Turns out, there is a vinyl floor product that is basically a tongue and groove floating floor. Who knew? Not me, since EEEW, vinyl!

It’s a special order at Lowe’s, so I grabbed some free samples (which come to think of it, the kitchen is so small, it would technically be possible to use just samples. Hmmmm…) Anyway, I eventually  swallowed my pride, placed my order for a (yuck) vinyl floor and never looked back. It certainly looks immensely better than the peach sea shell motif we had, and while somewhat flipper grade, it’s a good compromise for something we hope is temporary. When we are ready to remove it, the boards will pull right up and can be re-used elsewhere (or donated to Build it Green). No muss, no fuss, nothing into the landfill.

This is what the floor used to look like. Grossest portion not pictured.

The skinny hallway had some really sloppy flooring installation – the excess flooring was just bent around the baseboard, rather than being trimmed.

We started peeling off the layers, and found this:

Everything came up very easily, and the pine floor was surprisingly not all that sticky.

But nothing is ever easy, and  you know there has to be a catch. There is always a catch. In this case, rotted floorboards by the window. What started as a 1-day project became more like a weekend project. 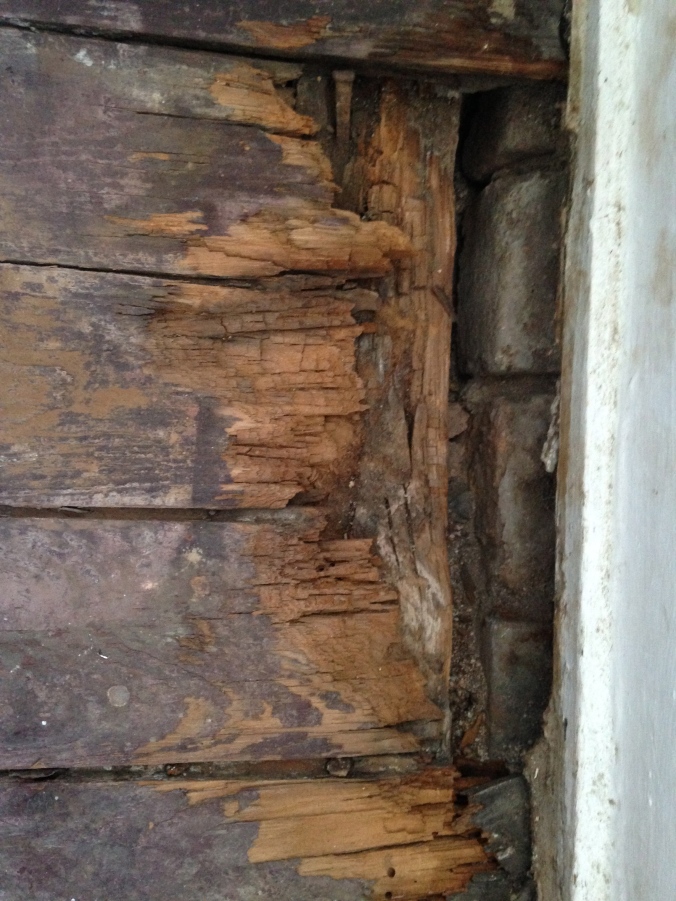 The rotted floor was repaired, as was the wonky woodwork under the window (you can see the panel removed in one of the photos)

Additional delays included union mandated cat feeding, which meant all work had to stop until the cats were good and ready to move out of the way.

We chose the Platinum Oak pattern, mostly because it hid dirt well and only minimally clashed with the cabinets. Would a darker floor look better? Sure? Does this one looks like something you’d see in a cheap flip? You bet. But it looks clean, most of the time. 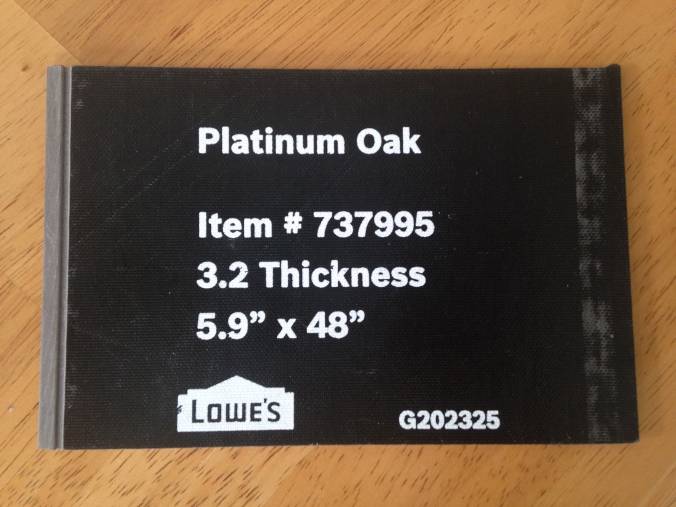